i cant write out a decent post for now. im in a bit of a rush, trying to balance releasing writeups for tirador, doing its tarpaulin and making changes on the poster, plus i got a 3 day shoot by sunday and an event in batangas on saturday. then it’s wedding time for two friends next weekend on sat and sun respectively, the first one being at baguio. then it’s another event in bataan on the 15th before i head home for cdo. whew. chorva chorva achuchu chu. cheers!

The UP Film Institute is most proud to hold the Philippine gala premiere of Brillante Mendoza’s Tirador (international title: Slingshot) this Monday, 3 December 2007, at 7 p.m. as the opening film of Cine Veritas Human Rights Film Festival.

The film is the sixth feature in three years from Brillante as practically all of his previous works have grabbed major international prizes. Tirador had its world premiere at Toronto (Canada, 6-15 September 2007); was exhibited for the Dragons and Tigers Out-of-Competition at Vancouver (Canada, 27 September-12 October, 2007) and got its Asian premiere no less at Pusan, South Korea (Window on Asian Cinema, 4-12 October 2007). It is slated to date for further showcase across the globe till middle of next year in prestigious filmfests foremost of which are the Marrakech (Morocco, 7-15 December 2007) where it vies in main competition for the Golden Star Grand Prize and the 58th Berlin (Germany, 7-17 February 2008) for the International Forum of New Cinema.

END_OF_DOCUMENT_TOKEN_TO_BE_REPLACED

For those who miss out on films by Mendoza, take note of his latest masterwork, Tirador (Slingshot) an intimate glimpse into the lives of criminals who have to deal with police raids and other hardships on the gritty streets of Manila. The film has already been picking up speed in film festivals, including Toronto, Dubai and the US. Filipino viewers will have their day as TIRADOR premieres at the UP Film Institute on Dec 3, 2007. The film stars Jiro Manio, Nathan Lopez, Kristoffer King, Coco Martin and veteran stars Julio Diaz and Jaclyn Jose. 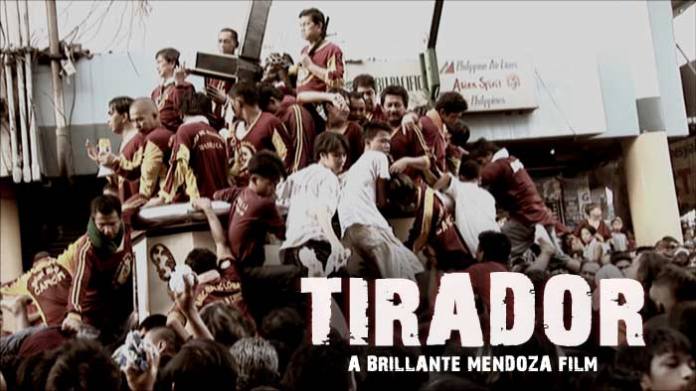 END_OF_DOCUMENT_TOKEN_TO_BE_REPLACED

was in cagayan a week and something for a shoot. am now back. more news later. yey