we survived! this would be the first time i had to deal with a schedule of 5 shoot projects, laid out on a week and a half, with 3 of the projects shooting at 6 consecutive days! preparations would have to overlap each other and on shoot days as well so i had to reorganize my staff to help me out with everything, including sending them to meetings and props checks. thank God for delegation and dissemination. i normally would deal with these myself but technology wouldnt allow for commercially-available cloning.

on one project, we had to work with celebrities on the launch of a new product and shoot at zambales (again), on camara island (again). im not complaining, i love zambales and this would be turn out to be one of the most relaxed shoots we’ve had. this was also the tvc that i got to work with budgette tan, who wrote the trese series, which i loved.  i brought my books to the shoot hoping for an autograph but was saddened to learn he left early on the last day.  tsk tsk, another time then.

the rest of my shoots were done in the studio and i had buboy (setman) build me set pieces quickly for the shoot only to strike them down immediately afterwards to make way for the next project. this included creating a whole barangay street, which was fun. i also employed a landscaper (same landscaper for the nescafe crouching tiger body partner chuchu shoot we did years ago–has it been that long?) so i could have real soil on my set haha.  had fun pushing the limit of glamour and fun on another project, working with swimming pools, bead curtains and incandescent bulbs. 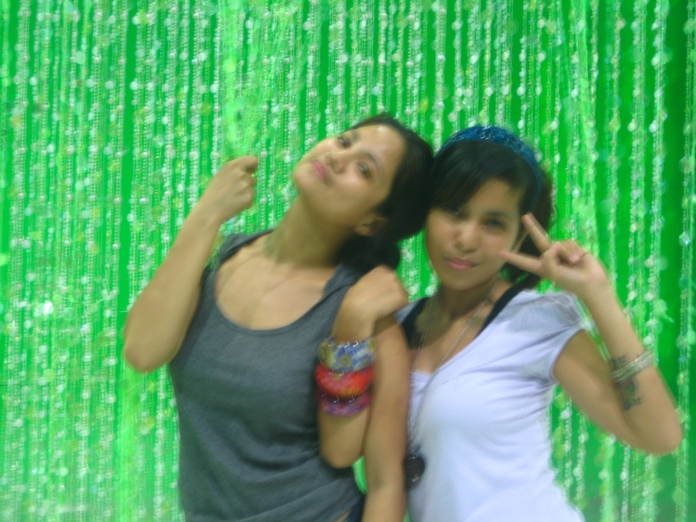 i did learn a lot working out this crazy month.  for one thing, i do concur and confeerm that sometimes youre only as good as what your assistants are also capable of.  it helps to have responsible and creative people on your team so kudos to the artdepartment! to the fabulous lolafer, to carlo, syrel, chantel, pj and to setman buboy and his boys  🙂   they attended to some of my meetings and made creative decisions so i didnt have to deal with some of them, stayed around when i had to do checks and did fabulous work on set details and costuming, and for proxying and made lamay on the set when i got sick.  cant thank you enough!

i also learned how the senior PDs manage to run around doing projects in succession and never losing their stride.  it’s pretty hectic work, reason enough to get really harassed and break down or burn out.  i was conscious not to be affected with stress, i needed to focus on getting the job done as this kind of work deals with a lot of solving design problems. the crazy schedule is something i hope i dont have to do again since i do lose control over some details and my work can be compromised.  im just thankful the artdep gelled well and i didnt lose creative vision because we were all in-line.  i know now we can do it.  question is, would i want to do it all over again?

in the end, it’s the people you work with that makes it worthwhile. when the director calls a wrap, it’s just a great feeling to have accomplished so much in so little time.  it’s hard work to make it look fun and easy, the advertising industry is fun though gratification is hard to get.  it helps to be surrounded by positive and confident directors and a production staff who believes in you, and im blessed to have worked with them.  otherwise i would have already stabbed myself with a spoon.

yehey! just received news via PEP.ph that serbis was nominated also for prod design 🙂  carlo and i worked on the film together and this is great news! wohoo! below is the article from PEP in full

The Manunuri ng Pelikulang Pilipino has already released the list of nominees for the 32nd Gawad Urian for excellence in filmmaking. In last year’s edition, the indie film Tirador was hailed as “Pinakamahusay na Pelikula” while its director Brillante Mendoza was cited for “Pinakamahusay na Direksyon.” The recipient of the Natatanging Gawad Urian was acclaimed filmmaker Kidlat Tahimik.

The awards night of the 32nd Gawad Urian is set for September 19 at the Cultural Center of the Philippines.

It is interesting to note that Daybreak co-stars Coco Martin and Paulo Rivero are competing against each other for the Best Actor trophy while Serbis co-stars Gina Pareño and Jaclyn Jose are also pitted against each other for the Best Actress Award. Based on the list given by the Manunuri, Yanggaw earned 11 nominations out of the 12 categories of Gawad Urian. This included double nominations for Tetchie Agbayani and Aleera Montalla of Yanggaw for the category Best Supporting Actress.

END_OF_DOCUMENT_TOKEN_TO_BE_REPLACED

these scans were posted everywhere yesterday on facebook. wishful thinking? a freudian slip? evidently somebody’s gonna be hanged for this. the last pic i lifted off from jessicazafra.

won best production design in the 5th cinemalaya film festival this year for mangatyanan directed jerrold tarog.  i missed receiving the trophy onstage as i was at work.  incidentally, mangatyanan actress che ramos was presenting the award and started jumping up and down onstage when she read out my name.  jerrold stood up to receive the award and admonished me for yet missing out again on the events leading to this moment  🙂  shucks, i havent even blogged about working on this film, i had soo much fun!  cheers jerrold and thanks for the opportunity! wohoo!

links from inquirer.net and pep.ph here. the pep article is posted full below:

Mangatyanan will be screened
at UP Diliman on July 31

Award-winning indie filmmaker Jerrold Tarog is happy with his Cinemalaya experience.  He confided this to PEP (Philippine Entertainment Portal) on the eve of the awards night, which took place on July 26, 2009.  Win or lose, being chosen to compete in the 2009 Cinemalaya Philippine Independent Film Fest, with his second full-length indie project, Mangatyanan (The Blood Trail) was already a privilege.

Direk Jerrold was on top of his film’s production, from conceptualization to actual shoot, post-prod, and even during the screenings, he had to oversee every aspect of his film, including technical troubleshooting and taking care of his guests invited to the special screenings.  He also made it a point to be present at every screening, “Oo, halos,” he said.  “Yun lang naman yung stress, actually.

*  *  *  *
BEST PRODUCTION DESIGN. As film, Mangatyanan tackles a very sensitive issue on incest and child abuse, as told against the backdrop of an ethnic harvest ritual (called Mangatyanan). It is conducted by a fictional tribe called the Labwanan. The lead female character, Laya Marquez (Che Ramos) is a travel photographer who is tasked to document the ritual before the tribe discontinues with the practice. Laya is accompanied by her supervisor (portrayed by Neil Ryan Sese).

The dwindling tribesmen, desperately being held together by its leader, Mang Renato (Publio Briones III) becomes a mirror of Laya’s own frailties.

Among this year’s competing full-length feature films, Mangatyanan proved to be the  most “exotic,” with a visual design that is simply stunning (credits go to director of photography/cinematographer, Mackie Galvez; and production designer, Benjamin Padero, who won the Cinemalaya 2009 award for Best Production Design).

END_OF_DOCUMENT_TOKEN_TO_BE_REPLACED

back in college, we had projects that required us to recycle or reuse materials and create artworks. i remember using busted lightbulbs and glued them on board, then stuck rolled up the foil from chocolate kisses on it, with the paper tag flailing out in the wind. it was more of an idea than an artwork really but i was fascinated with the project. there have been numerous lamps in galleries and in the market that used pet bottles and other recycled material. however, this stood out with its imaginative. creative and very dramatic reuse of plastic. takes recycling to another level, doesnt it?

ellen degeneres, you rock! ill always be your fan

in celebration of cory’s life, these performances are highlights during the last service at the manila cathedral before the late president’s body was brought to the manila memorial park in paranaque. lea salonga’s performance was stunning and flawless. [side comment: ito dapat ang qualities ng national artist: artistic excellence of the highest level (excellent na, highest pa). at nationalistic (proud to be pinoy) *comment posted on facebook].

END_OF_DOCUMENT_TOKEN_TO_BE_REPLACED

isdatchu ugly betty? eventually america ferrera’s ugly betty will have to have her braces removed, hair straightened and relaxed and her eyebrows threaded and combed. the question though is, are we ready? yes. maybe. yes. maybe. in real life, ferrera is pretty, no doubt about it. however, betty is a different matter altogether.  ill miss the cute ugly betty but i wont mind the pretty betty with the heart of Gold. but i think wilhemina is a villain enough for the show, dont add any others. the others get really evil haha

finally news about the thundercats movie by warner bros has been released on movieline.com. a lot of kids who watched this animated series looked forward to having this updated and turned into a movie.  unfortunately, it will be a CG movie. unless they make something as dramatic as the final fantasy film, this might turn out to be a disaster.  i loved the fan-made thundercats movie trailer and it seems it will be difficult to live up to what this trailer has shown (and with that i laugh out hard).

it’s been an emotional trip for the filipinos since the late president’s death last saturday (august1). and again we are drawn together to pay respects to the woman who is now billed as the mother of democracy.  today is her funeral and that means last night would be the last chance for me to see her.