had a very interesting night at van gogh is bipolar. FA classmate egan jimenez held a photo exhibit that opened today at the cafe.  took me a 2nd tagging of his invites on FB to haul my ass off and go (i dragged jhem manalang along with me).  i missed the company of egan and van gogh owner jetro, plus sir tats enriquez (missed cesar hernando by a half hour) and had a wonderful night of conversation over beer and tea. 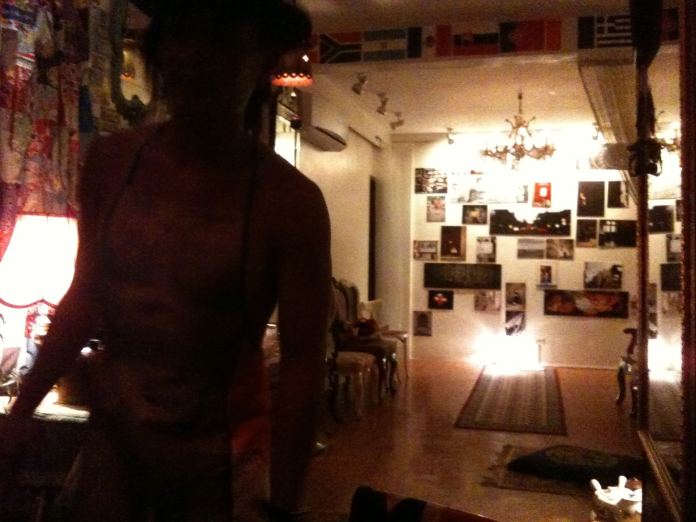 at the back wall are egan’s photos enlarged on plywood canvasses. i especially loved his amsterdam photo and the steps of the sistine chapel. jetro here decided to take off his shirt and wear the michelangelo’s david apron he got from italy.

listened to jetro’s stories in europe. his new motto in life is apparently hakuna matata. somewhere in scandinavia he met this old man with a thick white beard and long hair. he looked like a bum but jetro found out while talking to the guy that he was 1 of 3 remaining artists in sweden or something. And he plans to move in here in the philippines in november on fulfilling a life-long dream of retiring and dying here. and that he’s planning to buy an island and stay there. oh, and he has a pinay girlfriend.  i say, there’s no place like home.

flags of countries from jetro recent euro trip hang outside the cafe.

how is a tea party without tea pots?

jetro’s teas are grown from his own yard out in isabella. with the storm he tells me his trees have been uprooted. i asked, how was his family.  well, they have still have a roof, he says.

we dined at next-door black soup cafe but finished here in the red wall boudoir. the piece of knit hanging above i loved.  later i find out it was from gilda cordero. much later jetro tells me it was chinchin gutierrez’s costume from the stage musical, luna (aswang romance).  so much cooler. 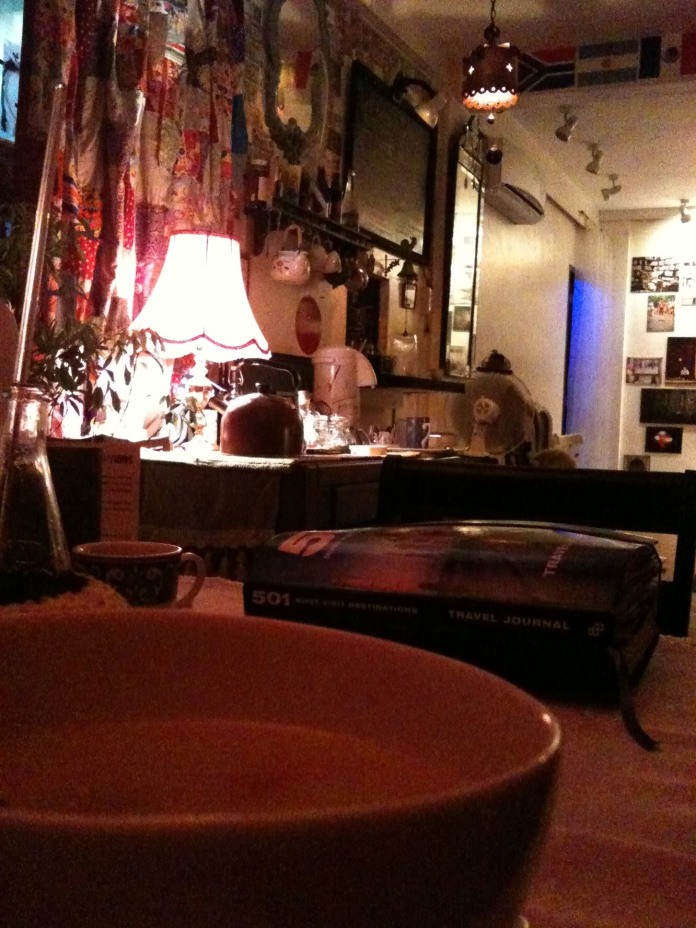 jetro did not serve dinner that day but his cafe became a soup kitchen of sorts.  on the foreground is his chicken soup (lovely); in mid ground is his travel journal (which includes an unsent letter to oprah).

jetro confesses his trip eventually became spiritual. by the 3rd week in europe he unloads most of his stuff and sends it back to the pinas. along the way he’d leave behind some of his clothes, realizing he doesnt need so much material stuff. by the 3rd month in europe, he’s left with a shirt, his jeans, shoes and bag. he even gave away his cellphone. he’s slept on floors, in bus stations, dined with the rich and convened with the poor.  he tells me his life in manila is complicated, realizing people can live on less and be happy. and he realized he was afraid of so many things. he says, by learning to let go of all anxiety and fear, only then can we really live.

this lace umbrella, used as a shade, was sourced from belgium in jetro’s recent euro tour.

a lot of us have wild dreams of being rich and traveling all over, experiencing what the whole world has to offer. he’s prodding me it’s time to resume pursuing mine. jetro declared to robert he was leaving for europe then. robert asked when, to which he replied soon. jetro surmises if he didnt leave now then he might never will. so off he went, just like that.

if only we could be as adventurous with fate and destiny, we will realize we were always meant to be where we only thought we’d go.

and just like that, i became more inclined to take that trip back to europe to live out a fantasy.  ever since carlo was invited to go to europe (for work) in february next year, i wanted to go back there too.  my first euro trip 5 years ago was only 5 days long. now i wanna stay for a month or two!  i want to go back shooting my short films and a bit of photography so im vying for a good DSLR (how about a canon 550D for now?).  my finances will need to brace itself but maybe i need to live off the edge a bit.  otherwise i wouldnt get to where i need to be.  you only live once.  no day but today.