this is y’egas, a t’boli singer from lake sebu in south cotabato. i came across her in 2004 when i went up the area to work on a documentary (which unfortunately i didn’t finish).  the first time i met her at her home and asked her to sing for the documentary, y’egas started lamenting in song about the conditions of her people and fighting for ancestral domain land titles in a largely government protected area (watershed). i gave her a token of thanks (p500) for her help and left.  i later learned from my guide that she didnt like me recording her; she was saying i might exploit her and her people and all that jazz. i was oblivious because she sang in her native tongue and didnt speak a word of bisaya! i also found out my recording got corrupted (used minidv tapes and for some reason they were pixelated and “choppy”) so i had to go back and redo the footage. i braved asking her to sing again and thankfully this time she was more than helpful, smiled a lot more and sang of the beauty of lake sebu and hoped i bring with me only good memories of her and her land.  she even recounted the death of a beloved datu chieftain and sang about a local epic.  here is the video to that song.

sorry, i have no way of translating this video.  took me a while to find this file, one of the few scenes i was able to digitally convert and keep 5 years ago, and upload on youtube.  has it been that long?  i have one more of y’egas dancing and her brother, ma’afil, playing the hegolung he made for me.  ill upload this vid at another time.  here are my blog entries on the trip around zamboanga and lake sebu in 2004:

a journey through latin america on a bike

watching walter salles’ the motorcycle diaries, i couldnt help but be reminded of my travels through mindanao between september to november of last year. and although my two-month something trip pales in comparison to che gueverra’s 8-month eye-opening medical mission, i also had my fair share of eccentric characters, majestic landscapes, life-changing moments and dusty roads on habal-habal.

yes, my very own motorcycle diaries. read all about it.

the cinematography of salles’ film is great, the film explores beautiful stretches of latin land, picturesque views of the countryside and a grim but real image of poverty, suffering, hope and yearning for a better world and a better life. the music is underscored beautifully. gael works wonders with his performance. one would think he was too handsome for his own good, but gael knows how to handle that and it never becomes a hindrance. i would love to see this film again, reminisce of my own past journeys, and dream of more travel through this country. a tourist in your own country i may no longer be.

i was inspired by the film to share a few more pictures of my trip down south. i would definitely recommend going around the country. you will realize there is indeed so much beauty here than you could possibly imagine, and so much love and spirit among its inhabitants.

manong bering at his house on km14 la paz zamboanga

mang bering has lived on the la paz mountain all his life. he boasts he knows every inch of the mountain and can even trek through it at night without a torchlight. whenever he’d take us out through the woods he’d normally make it difficult for us by not using the footpaths. luckily my companion roland and i were up to it. in the evenings we’d huddle near the hearth in the kitchen and tell tall tales of giant beasts and kapres who protect mang bering and his family while swigging straight tanduay. he’d laugh his heart out and talk to me in a mix of chavacano and ilonggo, and id confirm his statements with bisaya.

the trip up to la paz would take an hour and a half on habal-habal (a motorcycle) from the foot of the mountain all the way up 14 kilometers (hence the name of the station kilometer 14 hehehe how convenient, eh?) the road of course starts off cemented until you pass the 3rd kilometer then all hell breaks loose. to get to the watershed border of the la paz (this area is a buffer zone to the watershed) you have to continue up km26 still on habal-habal. the day we went up were escorted with armed men on convoy. i thought that was rather cool. didnt get a picture though, but i got it all on video. 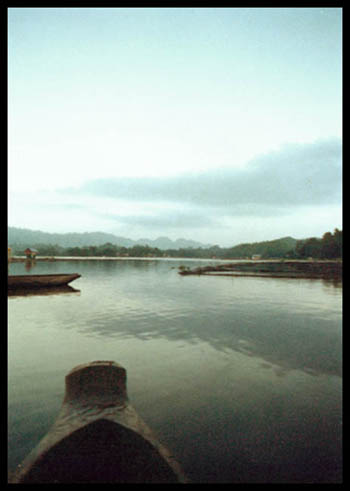 lake sebu is a municipality in south cotabato, featuring three natural, freshwater (of course) mountain lakes, the biggest being lake sebu. to get to the center of the town we had to travel on motorcycle (habal-habal, the faster alternative to jeepneys) for about an hour from surallah (three hours ata from general santos). most people in this area go around in motorcycles, same as with la paz in zamboanga. it’s the most convenient and cost-effective mode of transportation. deadma, your lamborghini cant do shit on the mountain pare.

this shot was taken from the resort where i stayed for two weeks (on and off). the lake is majestic but the people who live in this ancestral domain is more worthy of attention. their plight to security and livelihood may be paralleled to many like them all over the country but nevertheless as important. talking to a lot of their leaders has opened my eyes to injustices in the world over.

robert, nelson and a kid guide

watershed falls at lake sebu south cotabato to get to this waterfalls at the tip of the lake sebu mountain in south cotabato, we had to walk through the rainforest. it took roughly around an hour to two hours depending on how fast you can crawl through mud and rock, under canopies of giant ferns and shrubs. if you were lucky enough you would avoid picking up leeches and other bloodsuckers.

the scene in this place is breathtaking, and yes, i almost died here. i slid down the rocky wall that i climbed up on (in my underwear, yeah we took a bath). it was only more than a meter but the experience was something else, my life indeed flashed before my eyes! what stopped me from going all the way down the length of the mountain was my (thankfully) rather long chin.

my companions on motorcycle through the rainforests and ricefields in lake sebu were robert and nelson. nelson is from agusan and is a forestry graduate. robert is from the area and is half-muslim, half-t’boli. despite his mixed heritage, i often told him he’d be the future of his people, having been enlightened by every thing good and bad about their culture. i hope he’ll indeed take his place in the world.

mother from the ubo tribe nursing her child

we visited the house of an ubo datu and almost never came out alive! we were asked to wait near the house and because my friend didnt stop me from my actions, i went ahead taking pictures of the house and the residents. we were able to talk to the lady of the house and one of her daughters. suddenly this rag near me (suspended from the ceiling) started to shake. then water began streaming out from under the rag. what i originally thought was a bag of clothes turned out to be a baby cradle! the mother was amused that i was caught unaware. later she began nursing him and i silently took a picture before turning my attention to the grandmother who began chewing betel nuts.

i was lucky to have visited lake sebu during the height of its municipal festival. in the evenings the poblacion (sentro) was in full swing with kiddie rides, videoke booths, and gambling tables. we’d normally take a stroll, eat at the carinderia that serves a healthy serving of grilled chicken and swap stories of personal histories, philosophies and theories on life and development of the native race over red horse. will the drinking never end? 🙂

had a grand time listening to y’egas sing! the t’bolis normally tell tales and histories through song and i had the opportunity to hear y’egas recount the death of their datu chieftain, speak of the beauty of lake sebu, and detail a local epic by singing. and yes, she sang in her native tongue so i didnt understand a thing. but man, her eyes, they will render you helpless and mesmerized. she has cast her spell on you and you cant resist but do her every bidding. 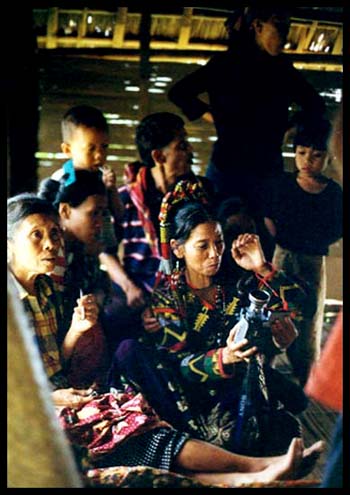 here is an interesting scene of the tribes people up close with technology. although they are not ignorant to the sight of tourists with their cameras, it’s a different experience altogether when they get to hold it and see themselves on the camera. and here, y’egas was watching and listening to herself. everybody were highly amused. 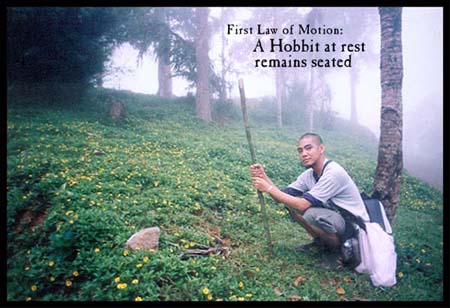 picture taken during one of those foggy mornings in la paz zamboanga. me with my walking stick, my videocam, and a raincoat ready for a drizzle or a trip through the rainforest.