i booked plane tickets for my art department staff around august last year so they could join me in my mindanao birthday celebration this year. i planned out a week’s itinerary for them, most of whom never stepped on cagayan de oro before. this list of activities included white water rafting and ziplining. unfortunately, about a week before we were to fly out from manila, we received news of a tragic accident resulting to the death of a bohol tourist while rafting in cdo. i tried to tame down fear by explaining this is an isolated case–only 3rd death in 17 years since the rafting industry came about; happened also on friday the 13th (june 13 2014). yes, superstition but whatever. eventually i got the group to agree on no rafting and instead do a tour of camiguin. 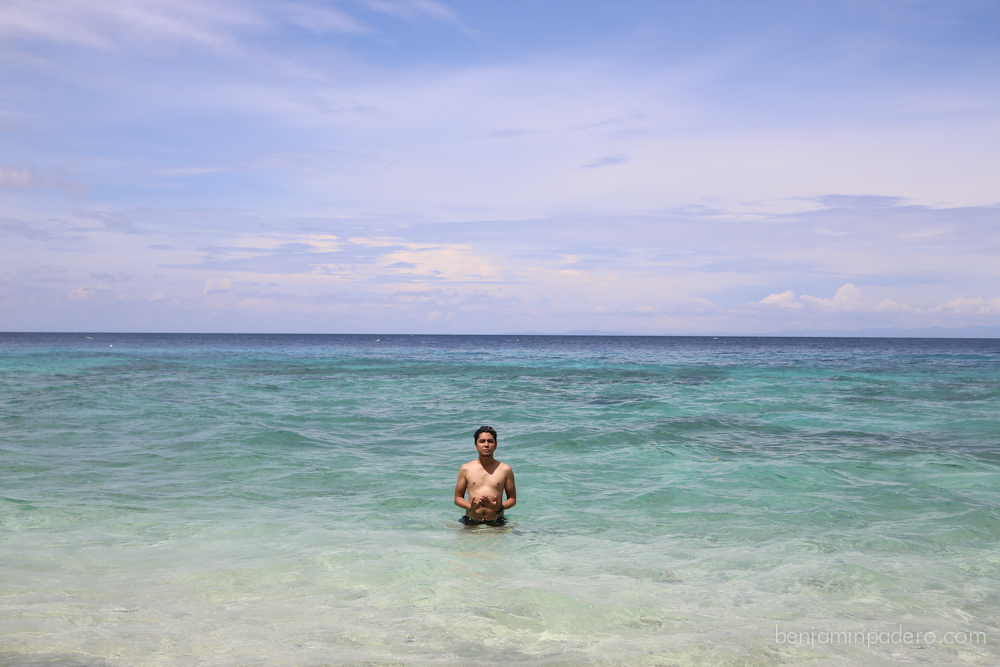 ive been to camiguin in the 80s and then around the year 2000. this would only be my third time there. the place almost hasnt changed and that’s a good thing. what’s also great about the place is it doesn’t cost much to go there. here’s my attempt to persuade others to visit camiguin by listing what we spent for this year (june 2014).

to get to camiguin from manila, you can take the plane to cagayan de oro. promo fares on cebu pacific normally are issued out 6-8 months before the travel period. after taxes and surcharges, one would be paying PHP1500++ promo fare round trip manila-cagayan de oro (no check-in baggage).  normal plane rates run around PHP6,000 round trip if purchased maybe a week before a flight, cebupac or pal (pal is normally more expensive by p200 haha). upon arrival at the airport, take a shuttle (ranges PHP 150 to 200 per head) to bring you to the city 30 minutes away (normal drop offs are at centrio mall or at limketkai mall).

from wherever you are in CDO, take a cab or jeep to agora market. ask to be dropped off at the bus terminal or where the vans going to balingoan pier are located. cab may be around p100. jeep is 7.50 per head.

there were 11 of us in the group to camiguin. the barkers struck up a deal with the driver (normally, you wouldnt be able to talk to driver until later not unless you have contacts) and explained to us the van had a 14-person capacity and they were charging us 1,650 package rate for all 11. we agreed, got on, and van immediately left for balingoan pier. 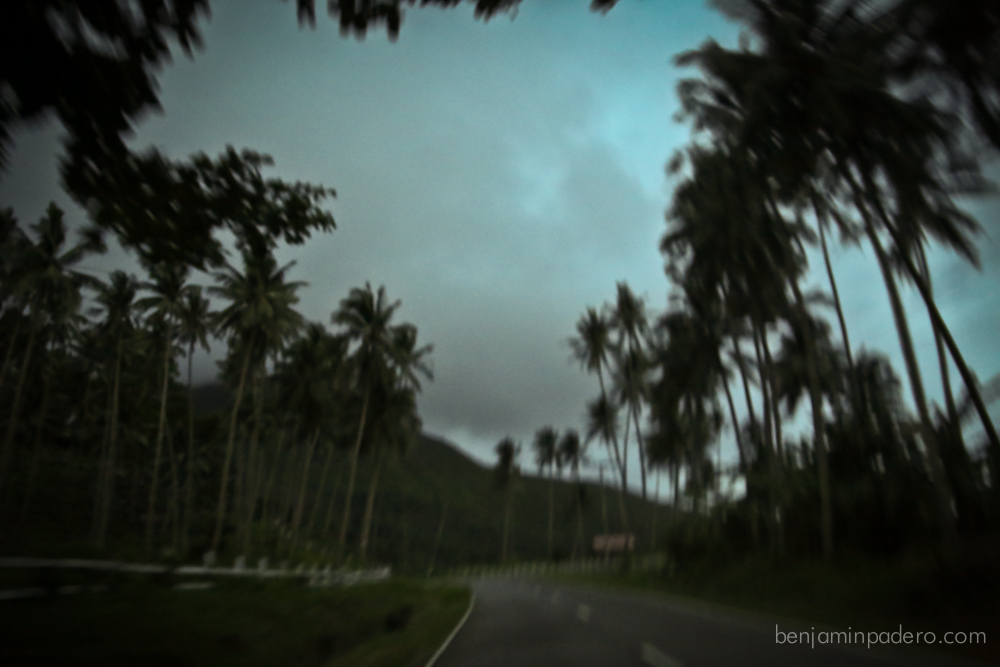 we wanted to leave CDO early and hoped to arrive at balingoan pier around 10AM (cdo to balingoan will take about 1.5 to 2 hours) but we got out of the house late. it’s always a challenge herding a large group especially on vacation where schedules are mere suggestions. the driver did assure us we’d catch the 11.30AM boat in balingoan pier. and we did.

upon arrival at balingoan pier, we headed straight to the ticketing office. ferry tickets to camiguin (benoni port) cost around P150 per head. plus P2 environmental fee. plus p2 terminal fee.

we arrived at camiguin’s benoni pier around lunchtime.  a driver with a multicab was supposed to meet us there (i made reservations prior). right when the boat approached the pier, porters started coming up the boat including a guy who came up waving a sign with my name on it. “that’s us.” we followed the guy who led us to a purple multicab and endorsed us to the driver from the resort we were staying at.

the day before leaving for camiguin, my brother-in-law and i were already in contact with the owners of paguia resort (contact number 0917-310-7085, look for ruel) and we booked for a big room/house that would fit our group of 11 for only P2000 a night, including an extra bed. the same resort also sent out

i asked him if we could stop over some carinderia for lunch and he brought us to some shack in the middle of nowhere for humba and other usual carinderia fare. lunch cost: p750 for 11 people (including 3 coke litro bottles).

we started our tour by visiting katibawasan falls (entrance of p30 per head). right outside the entrance there was a kiping store selling the delicacy for 3 for P100 (with a drizzle of coco jam). along the way to our next destination we stopped frequently by the highway to take pictures. stops included the sunken cemetery, the old church ruins, and the steps up the volcano. most are free (we didnt take the outrigger boat to the cross at the sunken cemetery and we only had to give a token donation at the church ruins). 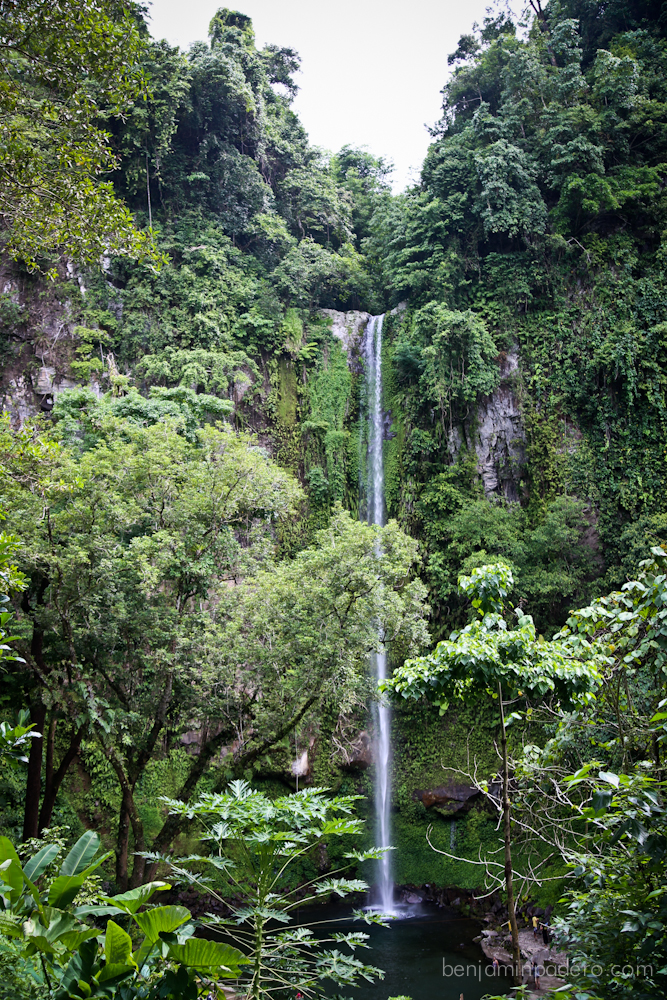 cross at the sunken cemetery site

our last 2 stops were at the cold spring (P30 per head), where we had fresh coconut water in its shell, (p30) and at the hot spring in the evening (P30 per head with around P150 for a cottage). it is typical to end the day at the ardent hot spring for a night swim. but first, our driver suggested we place orders for dinner at a nearby restaurant ahead of time. when we finished swimming and was ready to leave, we just called up the resto to fire up our orders and by the time we arrived at the resto, our food was ready for us. that nice resto filled us up well and our total bill was around P3000 (for 12 diners). not bad.

the next morning we woke up at 5AM so we could take the boats to the white island (P650 for 6 pax) by 5.30am. crossing the sea to the white island would take about 15-20 minutes. it’s best if you visit the island in the morning when the sun isnt too high up and the sea is not as turbulent as in the afternoon. since it was overcast that day, we stayed longer than planned. breakfast was hot pandesal peddled on the streets (p10/pack) and urchin at the island (P50 for 3 pieces).

we eventually left the island to check out of the resort and try to catch 12 noon ferry trip. we paid another P500 for the multicab to take us to the pier but not after doing a side trip at the ostrich farm and the kibila clam farm, which was along the way to the pier. well, sort of.  entrace to the clam farm was P25 and a cottage was P100. if you want to go snorkeling and see the clams in their habitat in the ocean, there are corresponding fees, including 150 for a guide plus rentals for gear. a really handsome aspin dog came to greet us and stayed with us the whole time we were there.

so far, i had the best time at the kibila clam farm beach. it was around noontime and it was high tide. the sea was clean and at a certain teal or aquamarine color and very inviting. waves were pretty big but that just added to the fun. instead of staying for 20 minutes, we stayed for almost three hours. we ordered for some recently caught fish to be cooked grilled, steamed, and in a soup. the cooks made suggestions on how to prepare and cook the fish so as not to waste any of the fresh produce. awesome! they charge by the kilogram (maybe around P180/10 grams) and it was one of the best meals ive had. 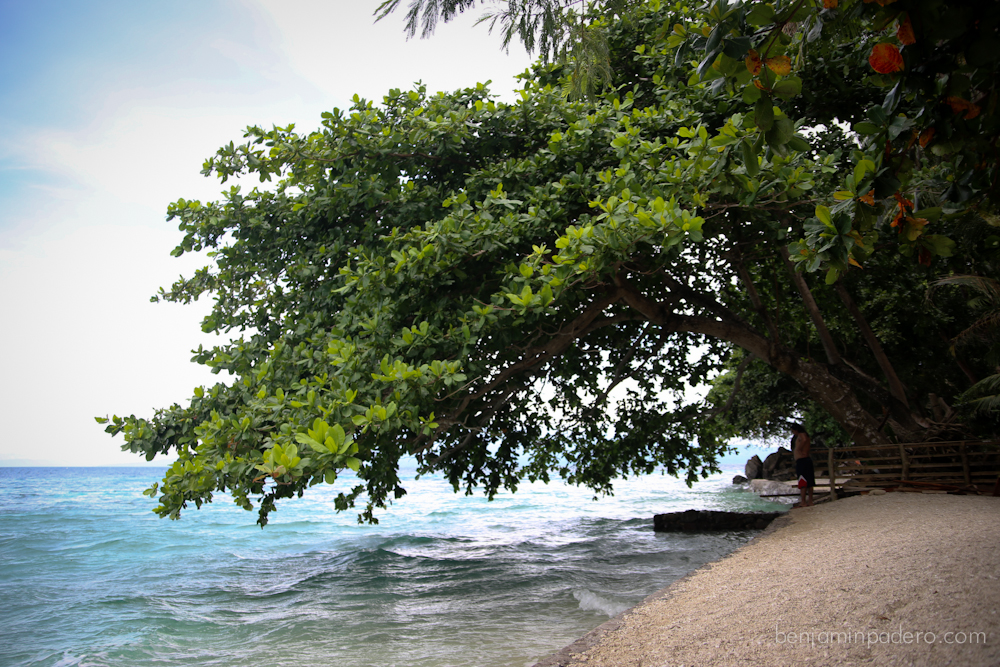 we finally had to leave in order to catch the last ferry out of camiguin that day. we made it 30 minutes before the boat had to leave (last trip 4PM). overall, it was an awesome tour of the island and my friends from manila had a best time ever. rest assured i will keep coming back for more of this unpretensious, laid back beach and provincial life.

for more photos during this trip, check out my facebook album here.